People spend more time in home and workplace buildings than they do in any other place. In Europe, buildings account for over 40% of the total energy consumed and user behaviour accounts for a significant proportion of this. While many people are aware of the importance of saving energy, sometimes there can be a lack of understanding of where significant changes can be made. Codema addresses this information gap by regularly running awareness campaigns with the Dublin local authorities for their staff and the general public.

These campaigns provide simple and effective information on how staff can play an active role in reducing energy consumption in the buildings they live and work in. These campaigns can be tailor-made to suit the needs of the organisation and include dedicated staff energy days, energy awareness surveys, expert talks on energy saving, competitions and quizzes, night-time energy audits, interactive displays and more! 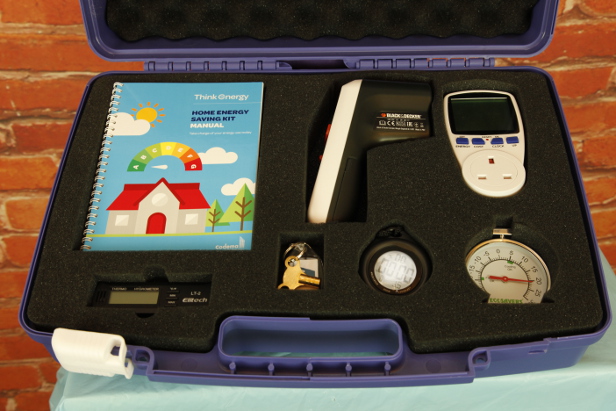 The scheme has been hugely successful, expanding to the majority of libraries in Dublin and a range of other library networks across the country. We have recently developed another 150 kits, which will be launched into 7 new regions across Ireland, while also adding more kits to existing library networks. It will bring to 17 the number of local authority regions / counties where the kits are available for the public to borrow from local libraries and a full list of library branches where the kits are currently available can be found here.

What is Think Energy?

In 2013, Codema developed an award-winning energy awareness programme for Dublin City Council called "Think Energy", which aimed at inspiring and informing staff in Civic Offices to become more conscious of how their behaviour can play a significant role on the energy use of the building that they work in. Co-funded through the European project BuildSmart, the campaign was carried out from June 2013 - June 2014, finishing with the Think Energy Awareness Days. It saw a range of Think Energy Ambassadors becoming active in their offices to motivate their colleagues in conserving energy. The campaign was supported by the Corporate Services Department in Dublin City Council and in 2015, the campaign won a Local Authorities Members Association (LAMA) Award for 'Best Energy-Smart Initiative by a Local Authority'.

Since its initial implementation, Think Energy has been carried on and was extended to Dublin City libraries to help engage with local communities who wish to learn about energy efficiency and renewable energy. For this purpose, Codema developed a range of communications materials including a 3D Sustainable House, a Lighting Display, a Guide to Home Energy Savings and the Home Energy Saving Kit (co-funded under INTERREG IVB NWE as part of the ACE project), which contains  a range of tools to help you save energy at home and is available to borrow free of charge from participating public libraries.

There is a range of Think Energy activities, resources, tips and information available on the Think Energy hub.