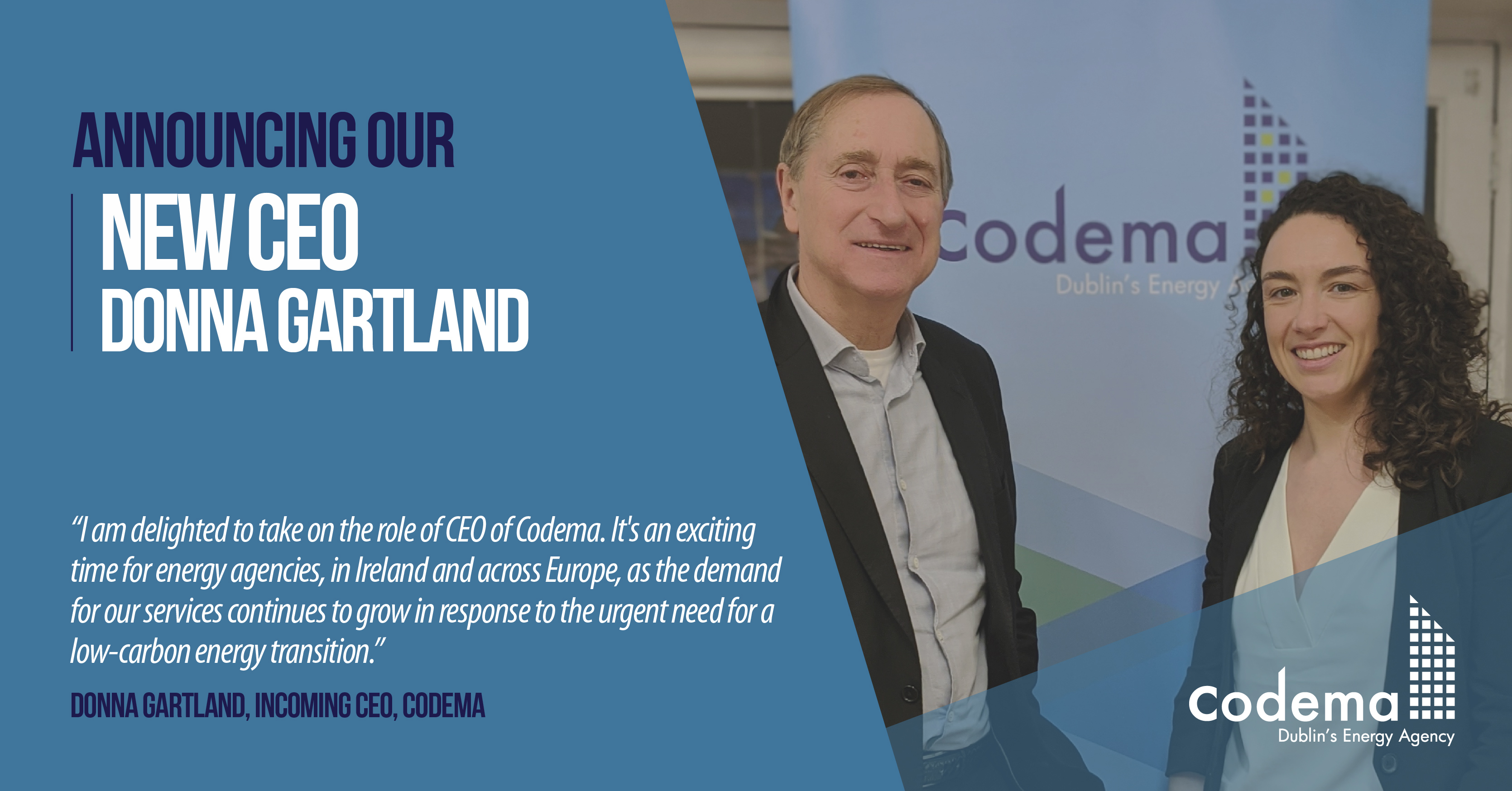 We are delighted to announce that Donna Gartland has been appointed as Codema's Chief Executive Officer.

Donna will become just the second person to lead the company throughout its successful 23-year history, and will succeed Codema’s Director Gerry Wardell, who founded the energy agency in 1997.

Donna is currently Senior Energy Planner with Codema and has already built up an impressive career portfolio during her six years with the company.  Amongst other achievements, she has been instrumental in developing district heating as a low-carbon solution to Ireland’s heating sector and played a key role in securing almost €25 million in total for the Dublin District Heating System and the Tallaght District Heating Scheme through the government’s Climate Action Fund.

Donna is currently leading the Energy Planning team in Codema to develop an Energy Master Plan for the entire Dublin region, which is supported through the Sustainable Energy Authority of Ireland’s Research, Development and Demonstration fund. The Energy Master Plan will be the first of its kind and will develop evidence-based, realistic, and costed solutions for Dublin to achieve its carbon emission reduction targets to 2030 and 2050.

Reacting to her appointment, Donna said: “I am delighted to take on the role of CEO of Codema. It's an exciting time for energy agencies, in Ireland and across Europe, as the demand for our services continues to grow in response to the urgent need for a low-carbon energy transition. Becoming carbon-neutral by 2050 is a particular challenge for a county like Dublin, which is the economic hub of the country, but it also needs to be a healthy, safe and happy place to live and work. Therefore, we are committed to working with the Dublin Local Authorities and other stakeholders to accelerate and drive this transition across all energy sectors of transport, heat and electricity, while ensuring there is meaningful engagement and collaboration for a just transition for all citizens of Dublin.”

Commenting on the appointment, Codema’s Director Gerry Wardell said: “Donna is an excellent leader with an impressive mix of engineering and planning skills, business acumen and a great ability to rally a team together.  Her vision of where we need to go and how we position ourselves is exactly what is needed to transition Dublin to a low-carbon county.”

Donna will officially take up the position of CEO in March 2020 and will work with Gerry until he steps down at the end of the year, during the transition period.