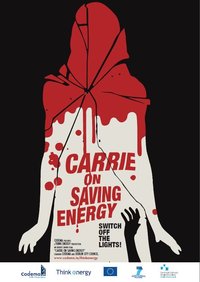 Just in time for Halloween, the Think Energy campaign uses well-known Halloween Film Posters and adds an energy-saving pun to encourage staff to switch off the lights when leaving the office. The spooky posters went up in Civic Offices on Monday, 21st October as part of Codema’s energy awareness campaign

which aims to inform and inspire Dublin City Council staff to become more energy efficient at work as well as at home.

The Civic Offices building used €611,712 worth of electricity in 2012 with approximately 64% linked directly to people in the building.

It is important that staff understand the significant role their behaviour can play in reducing the overall energy demand of the building. While we are working with Dublin City Council on upgrading the building and introducing more sophisticated technology, changes in staff behaviour can achieve quick and cheap energy reductions.

Staff should look out for failed, flickering, blackened, discoloured, dim and other defective lamps which can use more energy than a normal bulb.

Alan is part of the Think Energy Team and asks staff to report any defective lamps so they can be replaced.

Do you think you have better Halloween Poster Puns than us? Why not send them on to the Think Energy Team and we will put them up on the website. With your permission, your idea will be used for next year’s campaign. Simply email us at thinkenergy@dublincity.ie.

Until then, Codema wishes the staff at Dublin City Council a HAPPY HALLOWEEN!