The recession had a significant impact in reducing energy consumption in Dublin city, according to figures released today by Codema. 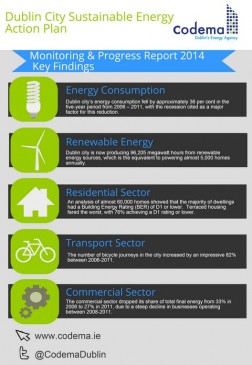 New data calculated for the Dublin City Sustainable Energy Action Plan showed that the city’s energy consumption fell by approximately 36 per cent in the five-year period from 2006 – 2011, with the recession cited as a major factor for this reduction.

The report also analysed the energy ratings of almost 60,000 homes and applied the results to the total Dublin city housing stock. It found that the majority of dwellings had a Building Energy Rating (BER) of D1 or lower. Terraced housing fared the worst, with 76 per cent achieving a D1 rating or lower.

The majority of housing is pre-1970 and terraced houses are the oldest housing type in the city. These properties require a huge amount of energy to heat so this needs to be a key area to focus on for future energy- saving initiatives.

There was good news within the transport sector, however, with the number of bicycle journeys increasing by an impressive 82 per cent during the five-year period. The huge success of the Dublin Bike scheme, the Cycle-to-Work scheme and the introduction of new cycle pathways throughout the city all contributed to the huge shift in passenger numbers.

The report highlights a significant modal shift, with passengers moving away from public transport and towards more independent modes of travel such as driving, walking and cycling,” explained Ms Gartland. “It is good to see an increase in the numbers walking and cycling but the number of private car journeys is still an ongoing concern.

The economic downturn, along with restrictions on heavy goods vehicles entering the city centre, resulted in a dramatic decrease in the amount of freight traffic in the city and was a key component in reducing the city’s carbon emissions during this time.

The commercial sector saw the largest change in energy consumption levels, dropping its share of total final energy from 33 per cent in 2006 to 27 per cent in 2011. This is mainly due to a surge in unemployment levels between 2008 – 2011 and a steep decline in businesses operating during this time.

Dublin City Council also made great strides in reducing its energy use with a reduction of 22 per cent in the energy consumed in its buildings, facilities, public lighting and council fleet. The local authority has successfully integrated renewable energy as a fuel for energy supply, with 120 megawatt hours of heating coming from solar technologies in 2011.